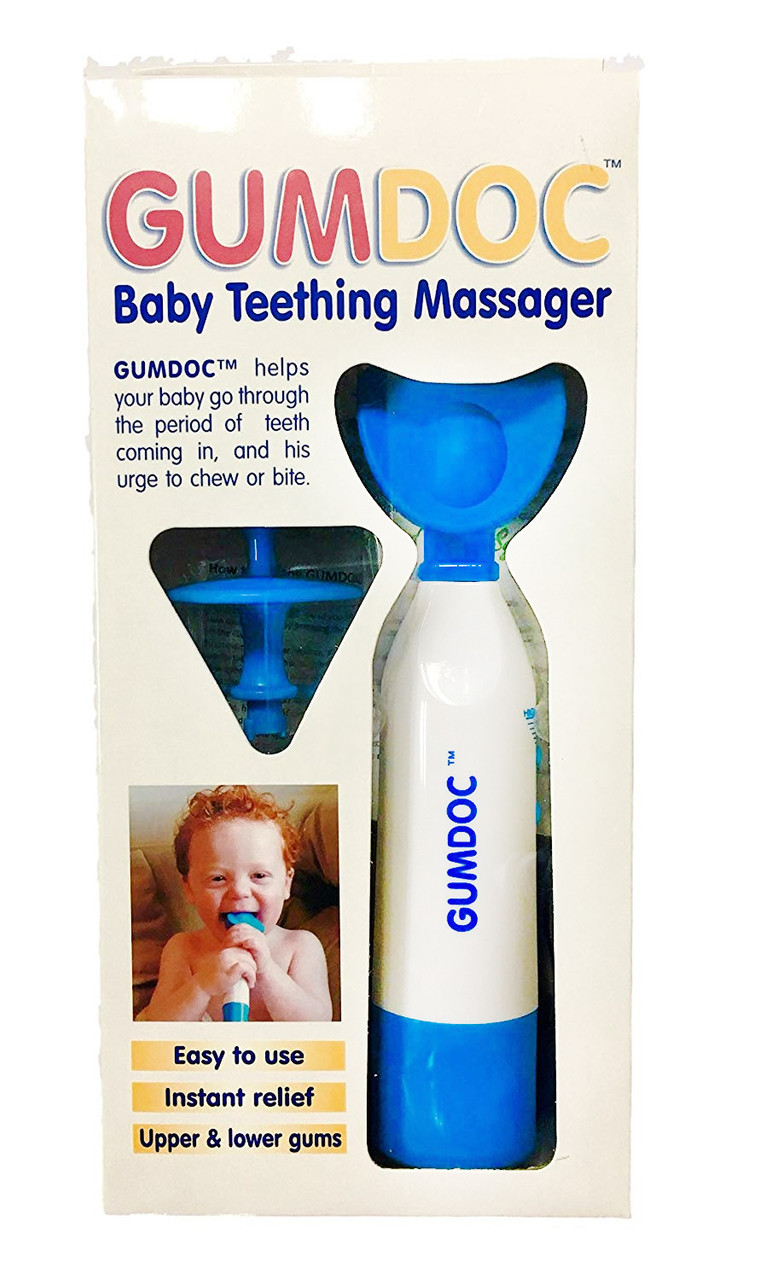 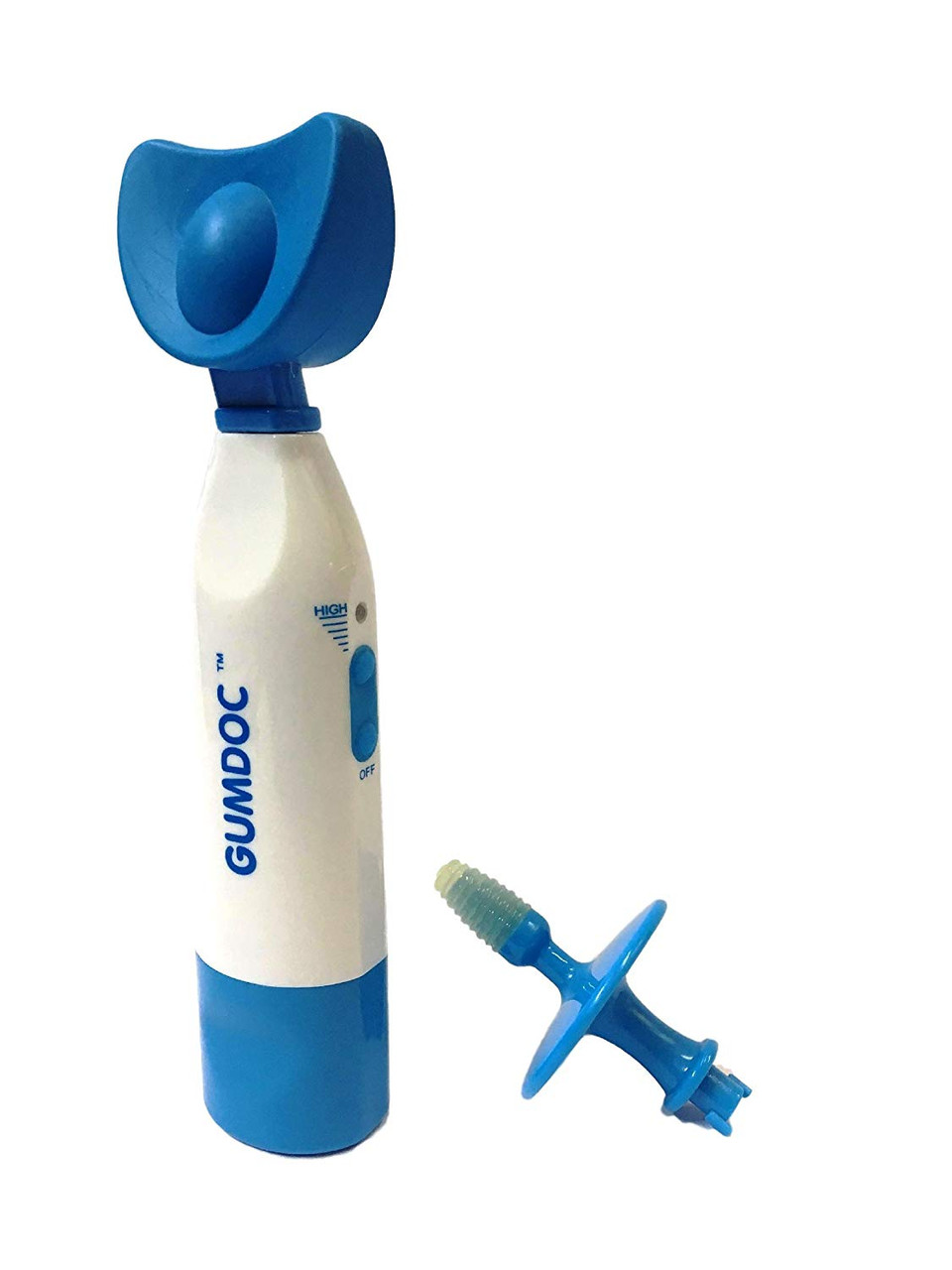 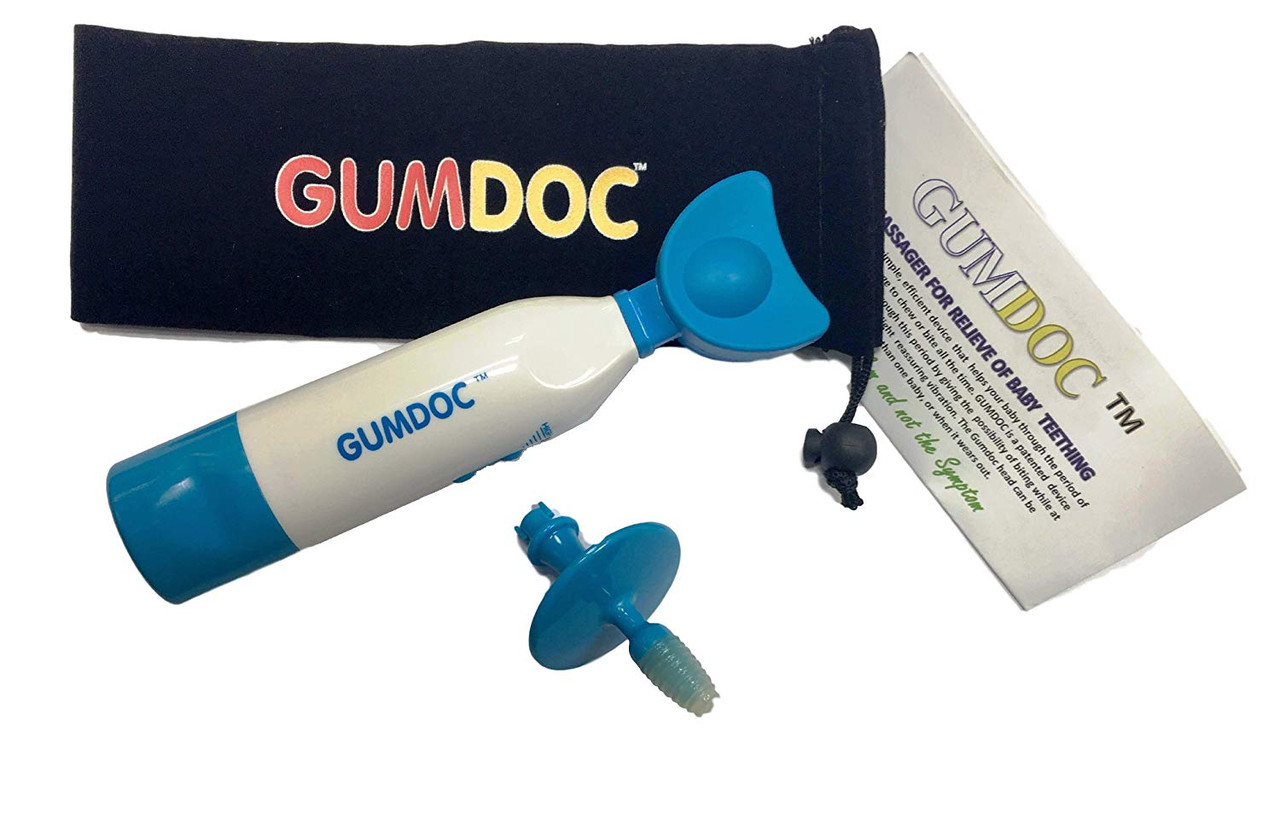 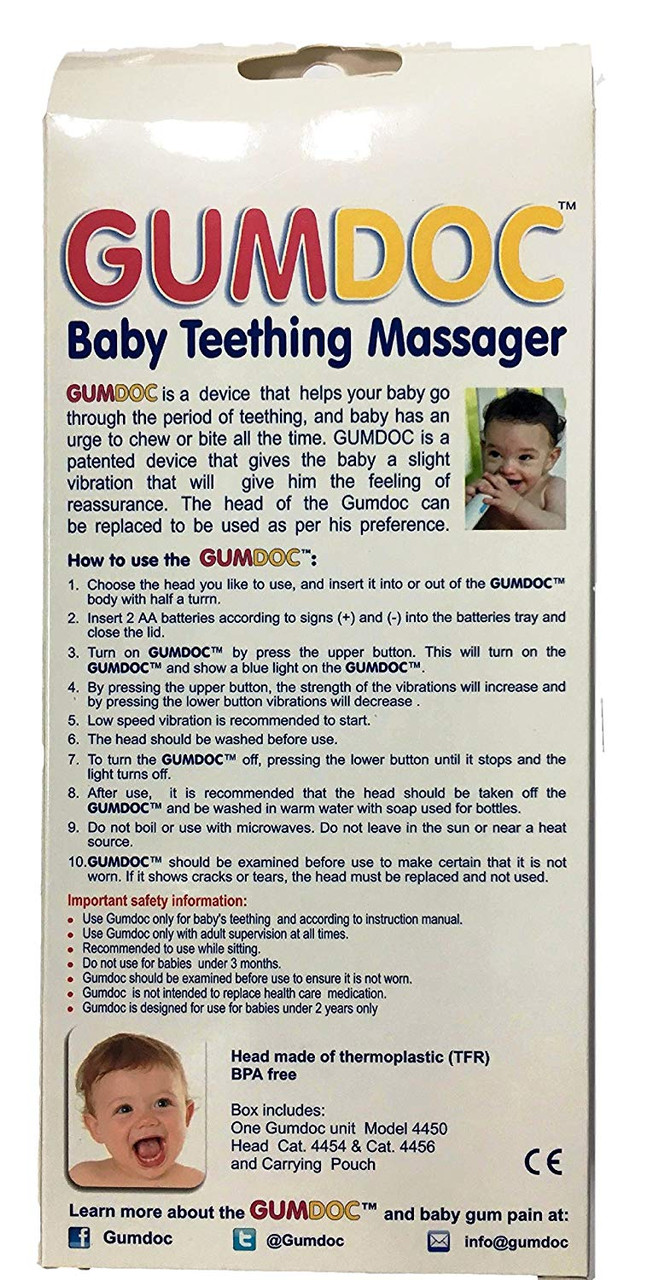 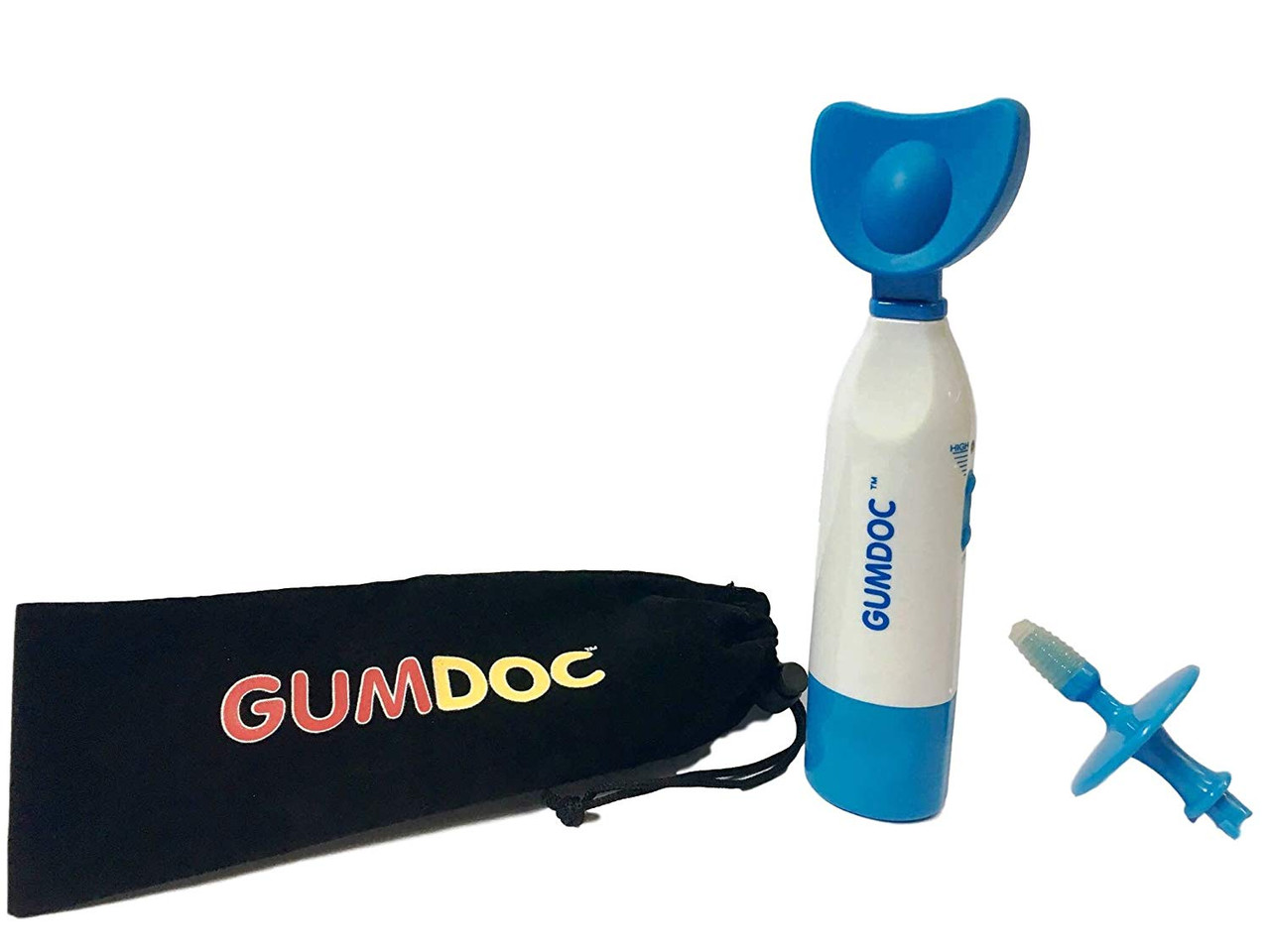 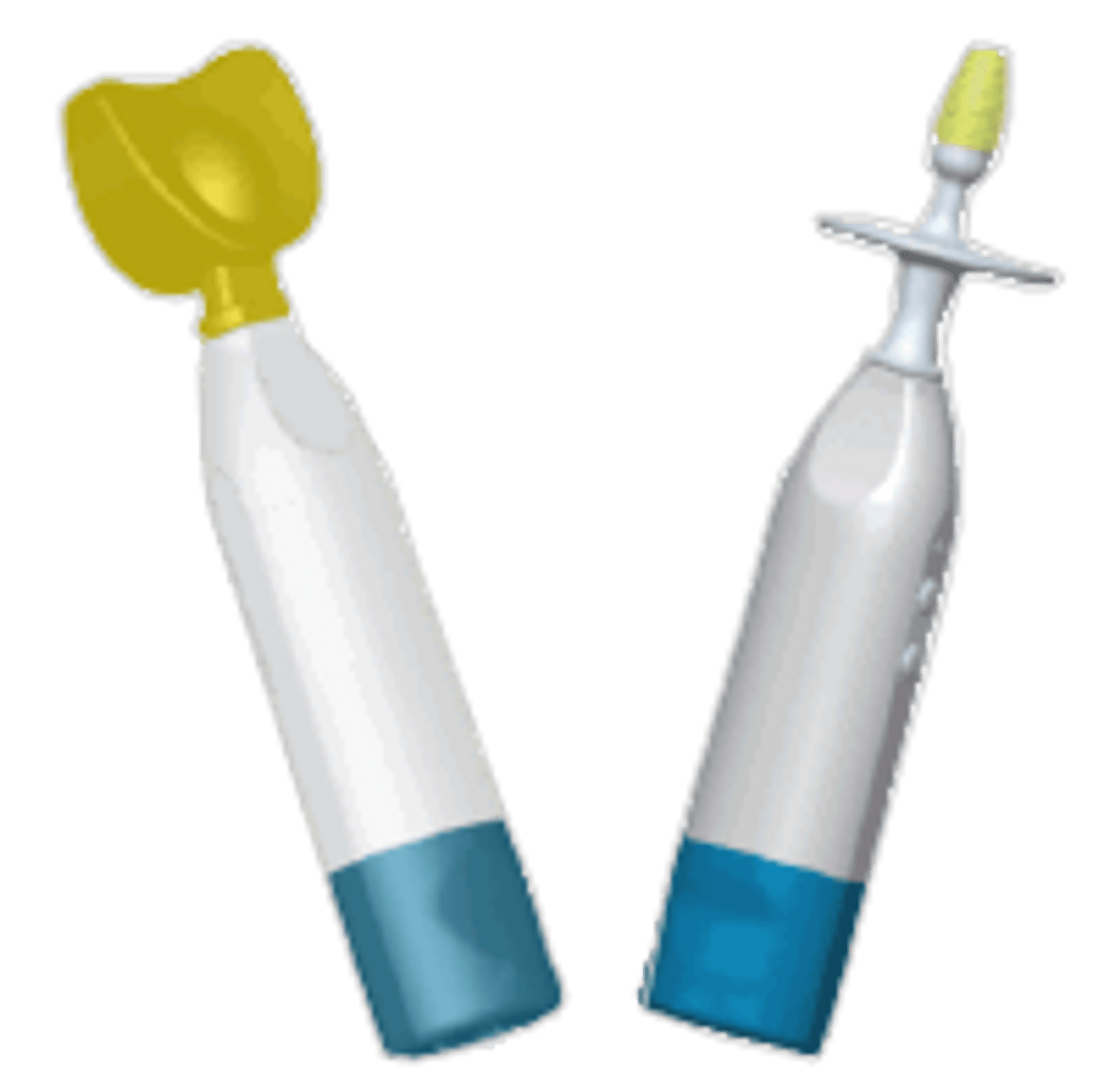 It is recommended to occasionally switch between the heads to learn the baby's/toddler's preference.

To use GUMDOC™ insert two AA batteries, choose and attach the preferred head, and turn the device on by pressing the upper button. GUMDOC™’s frequency can be adjusted by its buttons.

Using the GUMDOC™ is simple and intuitive, even for the baby! After attaching the head to GUMDOC™ press the upper button to turn it on. Pass it to the baby to play with and learn how the vibration feels. In most cases, during teething periods the baby will start biting GUMDOC™ to relieve the teething pain.

GUMDOC™’s heads should be washed or cleaned with a wet cloth before and after use.

Use Instructions
GUMDOC™ is a simple and efficient device that helps your baby through the period of teething and his urge to chew or bite all the time. When GUMDOC™'s head wears out or you want to use the device for another baby its head can be replaced.

Insert 2 AA batteries into the battery tray according to the (+) and (-) signs on the batteries and tray and close the lid.
Choose the head you want to use and insert it into the body with a twist looker. The head should be washed before use.
Turn on GUMDOC™ by pressing the upper button. The blue indication bulb lights up.
By pressing the upper button, the frequency of vibrations increases. Set the frequency to the level your baby feels comfortable with.
We recommend to start with low frequency and increase it as needed.
We recommend to use GUMDOC™ while sitting.
Turn GUMDOC™ off by pressing the lower button until vibrations stop and the indication light turns off.
After use, the head should be taken off GUMDOC™ by twisting, washed in warm water with soap and then dried.

What is Teething
Teething is a natural process in which first infant's milk teeth break through the gums. Teething usually starts around 6 months of age, but any time between 3 to 12 months is normal. By the age of 3, a child should have 20 primary teeth.

Every baby is different and hence, their teething occurs differently. An early developer may get its first teeth in about 3 months, whereas a late bloomer might have to wait for 12 months or more. There are rare cases in which a baby’s first tooth is visible at birth.

Teething maybe painful and is accompanied by teething symptoms such as swelling of the gums. Some infants are irritable, some get fever or lose their appetite.

To relieve the pain infants often chew their toys or bite their fingers.

Teething Symptoms
The major teething symptoms to pay attention to:
Irritability or fussiness - the mouth of a baby aches as the tooth presses on the gums and tries to come out. Due to the pain your baby may become irritable and cry all night or day. While some babies get irritable for a short period of time, others might remain unhappy for a long period of time (days or weeks). Kissing and cuddling your irritable baby will soothe him.
Drooling - teething stimulates drooling and a baby can drool a lot while he or she is teething. A teething baby starts drooling all day, due to which chaffing and rashes occur. Fasten a bib so that clothes don’t get wet and clean the mouth and chin with a soft cloth to prevent chaffing or redness.
Incessant chewing - the pressure that an emerging tooth creates on the gum can be relieved through counter-pressure. To relieve themselves from the pressure in their gums teething babies bite and chew objects around them.
Swelled or sensitive gums - when a tooth is about to emerge, it may cause gums to become more sensitive and getting red or swollen. Teething can cause red and swollen areas on gums. Gently rubbing the gums with clean fingers helps to soothe them.
Lack of appetite
Sleeping problems
Ear pulling
Many parents believe that their teething babies have loose stools, a running nose, or a fever but most pediatricians don’t think that teething is the cause of these symptoms.

Teething Relief
Here are teething remedies which can help your baby go right through teething:
Chewing - teething babies chew and bite a lot and there is a reason behind it. Chewing action produces counter-pressure and helps to relieve the discomfort. While babies generally start to chew the plastic toys themselves, chewing is more effective when the chewing object is cold. Cold chewing makes the gums go numb and provide a short relief from the pain. Make sure you have a big supply of teething toys or cold washcloths in the fridge (not in the freezer.)
Soft Massage - if the tooth has not yet erupted or the gums haven’t been bruised, massage and friction can work wonders. Even if your baby resists it at the beginning, massage his or her cheeks and chin softly. You can also rub the gums softly with a clean finger.
Massagers - unique teething devices such as GUMDOC™ relieve the teething baby from all the aches and discomfort. GUMDOC™ enables the baby chewing and biting to reduce the feeling of pain. GUMDOC™ also sends vibrations and can be used to open the Eustachion tube to prevent ear infections and blockages. GUMDOC™ head can be replaced to suit the baby's preference and enables using the device for more than one baby.
Teething tricks you shouldn’t try:
Rigid food like crackers, frozen bagels, and frozen fruits and vegetables. They appeal to a baby’s intense urge to chew, but when gnawed on long enough they can come apart in choke-hazardous chunks.
Rubbing a little brandy on swollen gums. Even tiny amounts of alcohol can be poisonous to a baby.

Warnings:
Use GUMDOC™ only for baby's teething and according to instructions.
GUMDOC™ does not replace medical treatment or medication.
While using GUMDOC™ do not leave your child unattended.
Do not let your child run or walk while using GUMDOC™.
Do not use GUMDOC™ for babies under three months old.
Use GUMDOC™ head only when attached to GUMDOC™.
Before use check that the GUMDOC™ head is not worn.
GUMDOC™ is designed for use for babies under two years old only.
Do not GUMDOC™ use in water.
Do not boil the head or use with microwaves. Do not leave it in the sun or near heat sources.